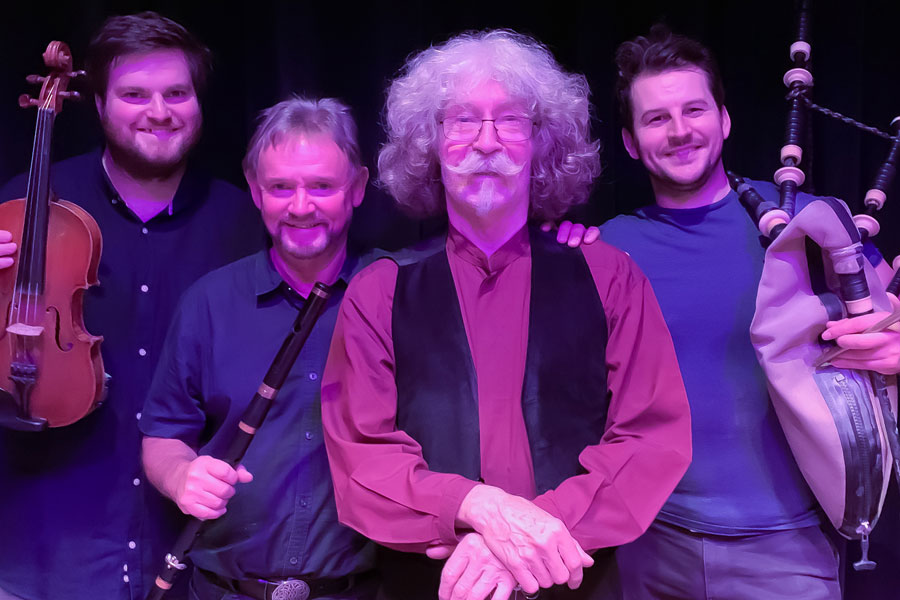 With this album, we have put together a collection of our favourite songs and tunes throughout the years. We hope mat you will get as much pleasure from them as we have. We would like to take this opportunity to thank our audience, near and far, for all the marvelous support you have given us over the years. His with this gratitude that we dedicate this album to you. Special mention goes to Herschel and Sarah freeman (and offspring), for all their help, support and encouragement (on and off tour), through calm and stormy weather.

To all our friends, slainte…
The Tannahlll Weavers

THE GEESE IN THE BOG & THE JIG OF SLURS
This set of tunes was our "opener" for many years; always an old favourite.

AULD LANG SYNE
This has to be the most famous of all Robert Burns' songs. The known version is normally associated with Scotland's New Year festivities, or a nostalgic end to an evening's revelries.
It is sad to say but the beauty and sadness of the lyric is usually forgotten, glossed over or at best never conveyed by the popular melody. It is to be hoped that this version carries the story to the listener as it does to us.

TRANENT MUIR
This is one of the Scots' great battle songs, that of the battle of Tranent Muir.
Being just a few miles from Tranent, we could actually see some of the places mentioned in this song as we recorded it.

THE HIGHLAND LADDIE
Now here we have a strange one. This song deals with a Lowland girl's love for a Highland man. She wants to run away with him and live in his kilt. This last statement is not as ridiculous as it might seem, as the plaidie and kilt were used not only as a uniform but as somewhere for a traveling man to sleep. A soldier in particular would never fight wearing his kilt, as it restricted his movement. This is also the reason why the Scots did win a few battles; if you know what is worn beneath the kilt, and you can imagine 5,000 of them running towards you…you would want to run away.

LUCY CASSIDY, THE BLETHERSKATE & THE SMITH OF CHILLIECHASSIE
Hornpipes are very much in vogue with pipers at the moment, and Lucy Cassidy is a fine modern example. Lucy was a famous lady in her own way. For 20 years she was married to a man with a severe drinking problem; he only had one mouth. One day, after all those years, he discovered the family nest egg in a bottom drawer: £500. and three golf balls. "Oh, what a wonderful person you are. Lucy!" he cried. "Scrimping and scraping away all these years to " make our old age a little bit easier. But tell me, where did you get the golf balls?" "Well," said Lucy, "you know, there were nights when I wanted a bit of fun too. But night after night, home you'd come, drunk and uncatchable. Night after night, you would stand at the door of our boudoir with spinning eyes and say, "The next time that bed comes 'round, I'm getting on." Night after night, you would ask me for black coffee and I'd refuse, because I didn't want a wide awake drunk on my hands. On some of those nights, I would creep next door to Harry the golfer for some love and affection. Every time I did, he would give me a golf ball to remember it by. I'd bring them home and put them in the bottom drawer … then I sold them twelve for a pound."

The Bletherskate is yet another of loin's many compositions. A rough translation of the title would be: one with a tendency to be ever so slightly loquacious.

The Smith of Chilliechassie is a pipe reel of some antiquity which appears in a number of different forms. Like many tunes, it first appeared with only two parts, which have been added to over the years, possibly to make it a greater test of dexterity on the competition platform. The variations are, however, quite imaginative.

FAREWELL TO FIUNARY & HEATHER ISLAND
This song tells of man's sadness at leaving a place he loves. Fiunary is on the beautiful northwest coast of Scotland. Heather Island is one of the loveliest of Scottish airs.

RODDIE MacDONALD's FAVOURITE
Here we play two reels which we learned together during a weekend's stay at Chez Moloney in Philadelphia. We have no name for the fiist one, so, just for the crack, until otherwise informed, we'll call it "The Goose that Stood on my Mother's Bottom Lip to Hang the Curtains on St. Patrick's Day."

THE GYPSY LADDIE
Rumour has it that the gypsy in this song was, in fact, a prince. Thankfully, for once, he hasn't started life as a little green amphibian only to arrive at the final humiliation — marriage, to a woman who kisses frogs.

JAME RAEBURN's FAREWELL
A song of enforced emigration, where poor Jamie must leave his native Glasgow, probably for Australia which was, at the time, a penal colony. We are, unfortunately, left to imagine for ourselves the nature of his crime, there being no clue whatsoever in the song lyrics. However, the times being what they were, it could have been anything from murder to the theft of the smallest coin of the realm. Remaps he was a Scottish pervert — that being a man who prefers women to whiskey!

JOHNNIE COPE & THE ATHOLL HIGHLANDERS
Once upon a time there was the 1745 Rebellion (or Uprising, depending on your politics), whereupon the Highland Scots, led by a Frenchman, Bonnie Prince Charlie, fought against the English, led by a German, George of the House of Hanover. This song tells of one of the Scots' early successes, the Battle of Preston pans, near Edmburgh. The English General, Johnnie Cope, seems to have been so afraid of Vie sound of the Scottish bagpipes that he disappeared taster lhan a five pound note in an off-license, also unfortunately getting back to England considerably faster than his troops. Being asked why he ran so fast, he replied that unfortunately he couldn't fly.

I ONCE LOVED A LASS
We heard this particular version of this song many years ago, but for a variety of reasons never got around to performing it either live or on record. It tells the tale of an unrequited love, perhaps the saddest of all human emotions. Let's face it, most of us like a good requite now and then. Unfortunately, it was not to be.

TURF LODGE, THE CAPE BRETON FIDDLERS' WELCOME TO THE SHETLAND ISLES, LADY MARGARET STEWART & THE FLAGGON
A mixture of modern and traditional tunes, featuring just about everything we play. Like the man says, "If this doesn't get your feet tapping, you're dead."