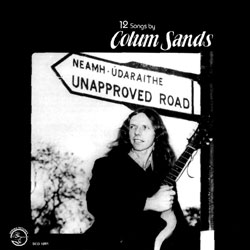 Colum Sands was born and reared in the lovely townland of Ryan near Mayobridge in County, Down. The area is rich in folklore and song; traditional music is a part of everyday life. Colum's parents. Mick and Bridie Sands are both fine traditional musicians and singers and the Sands Family Folk Group, of which Colum is a member, are well known at home and abroad. They perform regularly on radio and television. They have recorded eight fine albums and The Sands name is synonymous with good music and entertainment.

"Unapproved Road" is Colum's first solo album and it is an album of his own songs. They combine the best qualities of traditional music with themes that are firmly set in the modern world. They are varied in structure, mood and theme, and are the result of Colum's long and skilled apprenticeship in the performance and presentation of folk music. He has departed from the traditional paths to forge his own way ahead.

The blend of the old and the new on this record is innovative and tasteful. Guitar, bodhrán, harp and mandoline are effectively used to accompany lyrics that observe life in and around the small farms and fields of his homeland, but they also concern themselves with the wider issues of poverty, indifference and universal strife.

The songs are fresh, tuneful and melodic. They are influenced by traditional melodies but they are also a natural development and extension of Colum's awareness of the best qualities in Irish music. The lyrics are thoughtful and memorable, sometimes witty and satirical, at other times gentle and tender.

Listen to and enjoy "Unapproved Road." I have done so several times and I'll return to it again and again. His songs will be sung for many years. wherever folk music is played and appreciated. Wait and see. Colum Sands has carefully and lovingly produced his songs and set them on "the long road to perfection."