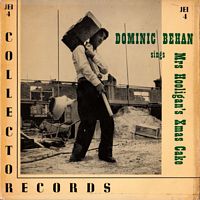 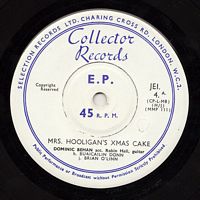 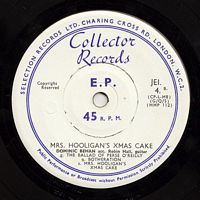 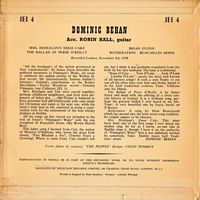 "All the hooligan's of the nation prostrated in their consternation". So James Joyce describes the gathered mourners at Finnegan's Wake, all ready to celebrate the sudden demise of the Walkin St. hod carrier, the internationally famous builder's labourer: Ireland's, contribution to the Robert MacAlpine — Taylor Woodrow world — Timothy Finnegan, (see Collector JEI. 1).

Mrs. Hooligan and Tim were reared together, perhaps childhood neighbours, and both were dispensers of lethal diet … the former is believed to have poisoned half the countryside with cake made for Christmas and eaten at the next one, while the latter's little bent in life consisted in dying a resurrection trick for the amusement of the best whisky drinkers in Dublin.

All the songs on this record are included in the text of Joyce's "Finnegan's Wake" with the one exception of Buacaillin Donn, (My Brown Haired Boy).

This latter song I learned from Cait, the widow of Maurice O'Sullivan, who wrote the great Irish classic, "Fice Bliadain a Fas", (Twenty Years a Growing). Where it came from, Cait couldn't tell me, but I think it was probably translated from the Irish by her late husband. The tune is traditional.

" Brian O'Linn … Tom O'Linn … Jock O'Linn … Llewlin O'Linn" surely the most well known of all nursery songs? It took a cute Paddy to cut out all the other fake over bids and firmly install it in the Irish traditional archives. Tune: Villikens and his Dinah.

The Ballad of Perse O'Reilly, is by James Joyce and deals with the offering of a short concise history of Ireland. It is a brilliant song, perhaps the greatest ballad I ever heard in my life. Tune: A very beautiful one by Joyce, based on II Baccio.

Botheration. A song by Dion Bouccicault which has passed into the Irish street song tradition. Its origins appear to be obscure.

Mrs. Hooligan's Xmas Cake. This must have been one of the first songs I ever heard my mother sing. So far as I know, no-one else in Dublin sings it, though I have it on the authority of "Finnegan's Wake" that it was definitely written by somebody. Tune: Dublin music hall. Tradition: street.