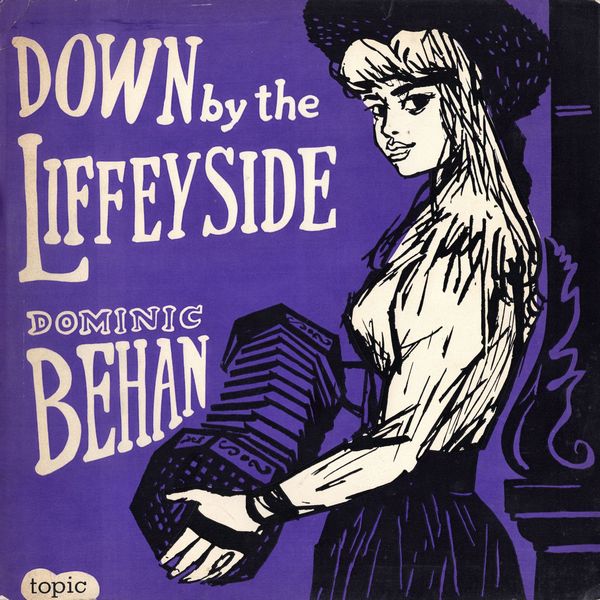 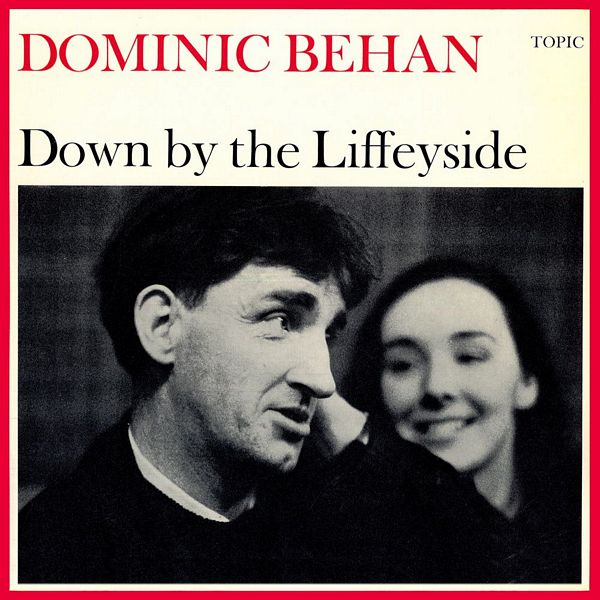 Dublin is a great city a graceful city, a fine and beautiful city, where, heavy and dark as Guinness, the Liffey flows, murkily, gently, and the Georgian streets, squares and by-ways gleam mysteriously and poetically in the soft, wet, Irish light — streets where Joyce's Poldy Bloom wandered for one whole, long, summer's day, by-ways where they celebrated Tim Finnegan's wake with whiskey and song. And song.

Song is part of the atmosphere of Dublin, song that crystallizes the wry, witty, eloquent speech of those who live there, song bred of the very streets themselves, bred of the gaiety and integrity and boundless exuberance of native Dublin-dwellers, Joyce's Dubliners. 'This atmosphere of song and loquacity nourished the Behan clan — the brothers; Brendan, the playwright; Brian, the rebel; and Dominic Dominic, who took to song as to a native element, to sport, dolphin-like in it.

As a singer, Dominic is a unique phenomenon. He straddles the worlds of folk-song club and theatre with sure-footed ease. He has even touched 'pop' with the tips of his fingers. Not for him the ivory tower isolationism of much of the folk-song revival; the essence of Dominic's singing is direct emotional appeal, involvement, excitement.

Dominic has also written plays; has starred in the West End (as himself — who else?); has worked as a house-painter; has published his autobiography, 'Teems of Time and Happy Returns; titling it, inevitably, with a quotation from the great James Joyce. Passionately, almost savagely Irish, although he now lives in London, his following is nation-wide. Dominic is as individual an individual as you could wish for and his singing is intensely individual.

Mercurial, almost flamboyant, he scoops a club audience into the palm of his hand. Without a trace of self-consciousness, he will crouch down, mimicking a greyhound at the start of the course as he begins to sing 'Master McGrath', the triumphant saga of a vocal and patriotic Irish greyhound, gathering speed on the spot till he reaches the finish. Roars. Applause. Tim Finnegan, he rises from the dead until one feels he might ascend straight through the ceiling, at one with a skyful of suddenly visible Dublin angels strumming Margaret Barry banjos (and a half-smoked Sweet Afton wedged between every halo and celestial ear).

His eclectic repertoire is still firmly rooted in the constantly recreated, vitally alive street music that rocks the pubs and bars down by the Liffeyside.

GET ME DOWN ME FILLING KNIFE — Dominic writes: "This is a skit on the building trade with words set to the old Dublin street ballad Hand Me Down Me Petticoat. 'The song dates from about 1944 and some of the words are by me (I don't remember which ones) and some by Brendan Behan of Dublin."

Songs mutate; new songs grow out of old ones; a parody will exist happily side by side with the song that is the source of it — as happens here. Both parody and original are in Dominic's repertoire.

THE SAINT — Dominic writes: "This alleges to tell the story of St. Kevin of Glendalough, who, it is said, thought more of celibacy than worldly wantonness. I imagine it was made by Michael J. Moran, the blind ballad singer of Faddle Alley, who called himself Zozimos. I got the song, though, like a good many more, from my father, Stephen Behan"

The austere and pious Celtic church gave Ireland the reputation of the Isle of Saints as long as fifteen hundred years ago. St. Kevin founded his monastery in Glendalough, Co. Wicklow, in the sixth century. He seems to have spent his first years there as a hermit, lodging in a tree; but later may have built the church called 'The Church of the Rock', which you can only get to by boat.

There is still a cave in the rocks at Glendalough which goes by the name of St. Kevin's bed. Perhaps he used to retire there to meditate — or to escape from the amorous Kathleen, whose mournful ghost still, they say, glides sadly in search of him to this very day.

DOWN BY THE LIFFEYSIDE — Dominic writes: "This was written by Peader Kearney, author of Ireland's national anthem, The Soldiers Song. I learned the song from Peader sometime in 1941 and it is always well received, which is not surprising since it is in the real Irish street tradition."

Dominic is the nephew of songwriter Peader Kearney. This one goes more or less to the tune of the lovely traditional song, 'Down by the Tanyard Side'. But the simple country girl who 'daily labours for her bread down by the Tanyard Side' has been transformed into a gay and gaudy Dublin belle in the reworking of it.

ROSSA'S FAREWELL TO DUBLIN — Dominic writes: "Jeremiah (?) O'Donovan Rossa was one of the principal men behind the intended revolt of 1864 which never took place and who was, with others, sentenced to life imprisonment. On release from prison he went to America where he continued to enlist aid for the Republican cause. Even in death Rossa helped in the founding of the Irish Republic, for when he died in the summer of 1915 and his remains were brought home for interring in Glasnevin cemetery, the Irish Republican brotherhood used the funeral to bring together large sections of Irish men and women for the Rising of the following Easter."

WAXIES' DARGLE — Dominic writes: "This song is as old as the River Dargle itself. Waxies were everybody and anybody who thought enough of drink to go and get it — they'd be called "the Chelsea set" or "beatniks" nowadays."

This jaunty fragment goes to the tune of 'Yankee Doodle Dandy', which they sing the sea-battle song of 'The Chesapeake and the Shannon' to in England.

RED ROSES FOR ME — Dominic writes: "I always thought that the great Irish dramatist Sean O'Casey wrote this for his play of the same name But I have heard it sung in a Dublin pub as though it had come from the tradition."

THANK YOU, MAM, SAID DAN — Dominic writes: "Thomas McDonagh said that he learned this in Co. Kilkenny. I learned it from my mother Kathleen Behan of Dublin. She and I (or me and her) often sing it as a duet."

This favourite Irish street ballad, common all over Ireland, has a wry touch of irony about it that, perhaps, accounts for its popularity.

JOHN MITCHEL — Dominic writes: "This gentleman was transported to Tasmania for life after the abortive revolt of 1848. This song is one of the many about him. In Ireland songs spring up every minute of the day about every conceivable incident. That's what keeps us supplying the rest of the world with culture injections."

Son of a Protestant minister of Co. Derry, Mitchel lived from 1815 to 1875. A fighter against British rule, he gave weekly lessons in street-lighting in his newspaper, The United Irishman. In 1853, he escaped to the U.S.A. and founded a newspaper in New York, mainly in the interests of slave-owners. In her book The Great Hunger Cecil Woodham-Smith the historian says regretfully: 'he not only defended slavery but regarded the emancipation of the Jews as an unpardonable crime and became a bitter critic of his former comrades. Mitchel was inspired not by love of liberty but hatred of England."

Yet this song, for all Mitchel's later history, captures him for ever in the heroic attitude of his trial for felony in 1848.

THE FINDING OF MOSES — Dominic writes: "There's no truth in it at all. But because it was made by Zozimos it lives. I learned it from an old man in Sandymount — in a pub, of course."

If you've heard the dulcet Miss Baez or one of her imitators doing a version of this, Dominic's will surprise you. This engaging Dublin version of a biblical story has been called in its way, a satire on balladry and is traditional in the Dublin area.

MASTER McGRATH — Dominic writes: "This ballad sings the praises of Lord Lurgan's champion greyhound when he won the Waterloo Cup in 1869. In fact, he had already won it in 1868 and was to win it again in 1871. Hurrah for Master McGrath."

Talking racehorses are familiar enough in British folklore and folksong. Here is a talking greyhound, and a nationalistic one, at that.

DICEY RILEY — Dominic writes: "Let's say Zozimos wrote this one as well. By the way, he couldn't write because he was blind from the age of two weeks. 'Made' is much better, anyway."

FINNEGAN'S WAKE — Dominic writes: "One of Joyce's favourite ballads and it gave him lots of ideas for the inexplicable to some (not to me, of course) masterpiece of overstatement Finnegan's Wake.' To join in the entertainment at one's own funeral is a recurring and powerful human desire; this a peculiarly satisfying song. Somewhere, there exists a recording of Joyce himself singing it."

THE WOMEN ARE WORSE THAN THE MEN — This jaunty ballad, common all over the British Isles and the U.S.A. enshrines a libel against womankind the origins of which, are lost in the mists of antiquity but which comes with perennial freshness from the lips of male singers. A classical lady who went to Hell and came back again was Alcestis; but her errand was to fetch home her husband. She is no relation of the virago of this song. Some versions have a whistled refrain, perhaps a relic of the ancient superstition that whistling summons the devil.

EASY AND SLOW — Dominic writes: "Some of it is in O'Casey's Red Roses for Me. The rest of it I got from an old lady with a string bag and an awful voice in Giggleswick."

Giggleswick is a village in the Yorkshire dales. Among other attractions, it boasts an ebbing and flowing well. But this song is patently of Irish origin. The buckling of the shoe is a piece of sexual imagery as familiar as it is graceful.

THE SPANISH LADY — Dominic writes: "Hamish Henderson tells me this was written by Joseph Campbell of Ulster. Fancy that now."

In her traditional dress, the Spanish lady is sometimes encountered washing her feet, sometimes combing her hair, sometimes counting her cash (Alan Lomax thinks she might be a prostitute counting up her evening takings) — but always by the light of a candle and always in Dublin City. Yet who she is and how she got there we do not know; all we know is that she was very beautiful, and very exotic, and also inaccessible.

This is a treatment of a tune and theme common throughout the British tradition.

THE TWANG MAN — Dominic writes: "Zozimos wrote this one too. Born 1794 — died 1846 and his songs and ballads are still going strong. A twang man is a person who used to sell sticks of sweet rock. The twang knife is what he used for cutting it."

BOLD ROBERT EMMETT — Dominic writes: "Emmett didn't die with a smile, he was far too intelligent. The finest intellectual leader the Irish ever had in arms (other than James Connelly)."

The song was written about the Emmett revolt of 1803.

BIDDY MULLIGAN — Dominic writes: "This a music hall song of the last century. A great favourite in Ireland."