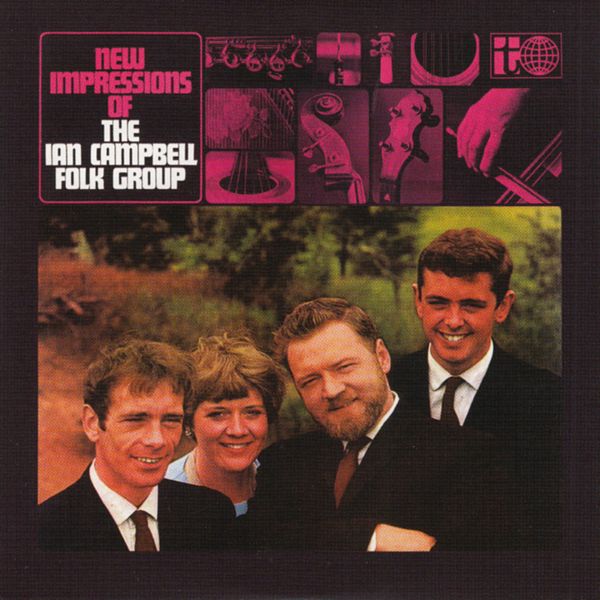 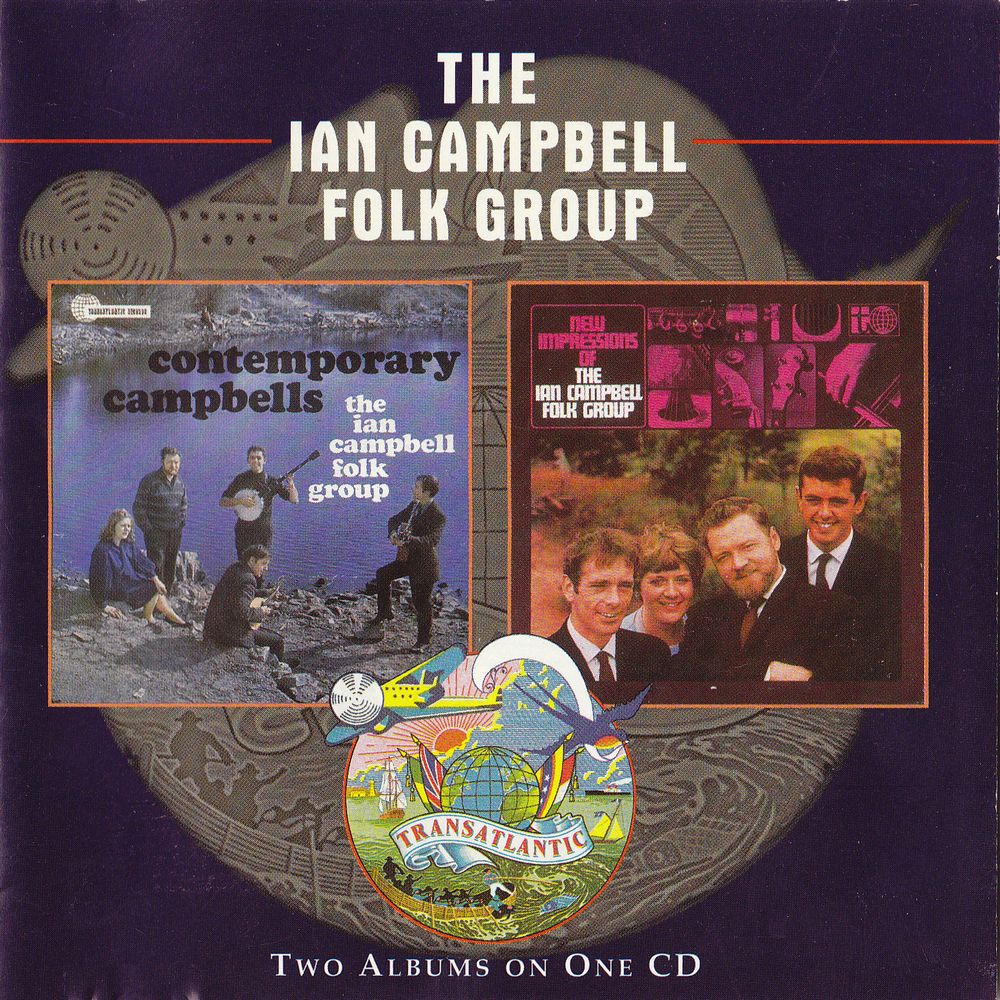 New impressions of the Campbell? We wanted to find a title which would take note of the change in instrumentation which makes this record so different from the others we have made. The fiddle, so long an integral part of the Campbell group sound, has been replaced by the flute played, very satisfyingly we think, by George Watts.

When we asked our club members at the Jug O Punch to suggest a title we were inundated with catchy ideas, like Watts Up With Campbells and High Flutin Folksongs, as well as a few suggestions which were probably actionable but we decided on New Impressions.

As well as George on flute, piccolo and clarinet this record also features John Dunkerley on accordion, and a couple of tracks on which we are augmented by cello and oboe.

Lord of the Dance — Sydney Carter once sent me a book of contemporary carols he had written, and I earmarked this one for future performance and then, I am afraid, forgot about it. Nearly two years later John heard it performed by Martin Carthy on one of Sydneys television programmes and enjoyed it so much that he drove us mad for days humming and whistling it incessantly. Finally I suggested that he arrange it for the group to perform, and so he did.

Berwick Brose — Two traditional Scottish dance tunes arrange for flute, banjo and rhythm. The one in 3/2 time is called Come to Berwick. Johnnie, and the 9/8 one is called Brose And Butter, so it seems natural that the marriage of the two should produce Berwick Brose.

The Snow is Falling — The idea for a song in which the seasons of the year would symbolise the stages of a love affair seems to have been kicking around in my head for a long time. Late one night a couple of years ago it suddenly wrote itself in about half an hour, and then, inevitably, when I read it over next morning I did not like it much, so I hid it away in a drawer intending to rewrite it some time. I recently found it again and decided on a few small alterations, but I found that the tune I had intended to use no longer seemed to fit. I asked John to try writing a tune for it. and how successful he was you can judge for yourself.

The Bold Benjamin — This is from the Penguin Book of English Folksongs, edited by A. L. Lloyd and R. Vaughan Williams from the Journal of the English Folk Dance and Song Society. The words and melodic line are substantially unaltered but I have taken a great deal of liberty with the rhythm in order to give the song a more natural phrasing and a smoother flow than would result from following the notation given. I feel that the limitations of conventional musical notation make such publications a helpful guide rather than a rigid authority.

New York Gals — From Shanties of the Seven Seas by Stan Hugill. It seemed that the jaunty piccolo was more suitable than the flute for this cocky tale of the young sailor taken for a ride by the Yankee lady and her flashman.

The Shoemaker — Brian tells me this song comes from Hertfordshire, although I have encountered an almost identical version in Cecil Sharps Appalachian collection. I remember actor Bernard Miles singing it in a film years ago, so it should be quite a well-known song all over Britain. All the more strange, then, that I have never heard it sung in a folksong club.

Baron OBrackley (Child 201) — A very popular version of this song was collected by Hamish Henderson, of the School of Scottish Studies. In order to test the efficiency of the oral transmission of songs among contemporary singers, Hamish says, he deliberately refrained from publishing it, but performed it frequently. In a very short time it had become one of the most popular songs of the club singers in Scotland.

Aye Waukin O — One of those old Scottish songs which seem to crop up in every published collection, but which contemporary folksingers seem content to leave in the delicate hands of those tartan-stoled ladies whose refined trilling can be heard so frequently on e certain dismal type of Scottish television programme.

Lover Let Me In — When John holidayed in Yugoslavia a few years ago this Bosnian folksong was very popular. He brought the tune back but no words that we could decypher, although we did find out that it was called. Roast Me the Coffee, My Dear I put these words to it to produce a sort of Night Visiting-Love is Teasing hybrid, and arranged it to try and give my impression of the sound of a Yugoslavian folk ensemble. Nothing like it says John. Ah. well.

Greensleeves — This very contemporary treatment of a well-known Tudor tune proved to be very popular on our recent trip to Czechoslovakia, so popular that we were asked to record it for release over there. We thought it would be nice to have it available on record in this country too.

Can Ye Sew Cushions — This is another of those songs which fall into the same category as Aye Waukin O. Scotland has many of these nineteenth century drawing room folksongs which are frequently performed in a simpering twitter from behind a lace hanky. This style of singing is irrelevant and misleading, and often alienates the folksong enthusiast from what may be a lovely song. Although these songs have obviously undergone much restoration and refinement in their passage through the drawing room soiree, I feel sure that they are a real part of our tradition and deserve a place in the repertoire of the contemporary folksong revivalist.

Farewell To Tarwathy — A gentle song from the days of whaling under sail and if I remember correctly, we found it in The Singing Island by Ewan McColl. When we were in the north-east of Scotland recently we looked for the places mentioned in this song. Crimond and Mormond Hill we found, but no sign of Tarwathy.

Gulls O Invergordon — On that same trip we performed at Baltimore in Rosshire, where we heard this recently written song about the gull problem of the new distillery at nearby Invergordon. No one could tell us who had written the original words, and already several variants are in circulation. The manager of the Ballintore Hotel kindly gave me the words current his bar and, with very little emendation, those are what we recorded.

The Laird O Windy Was — This was learned from Jeannie Robertson on one of the memorable occasions when she visited us in Birmingham. It is a fragment of a larger song, Let Me In This Ae Nicht to be found in Herds Ancient And Modern Scots Songs and in recent editions of the Merry Muses of Caledonia.

The Card Song — An army song collected by Kidson and popularised some years ago in this form by Ewan McColl. We find it a good song with which to end an evening, so why not a record?

These two highly regarded albums recorded by the Ian Campbell Folk Group in the mid-sixties contain their innovative arrangements of traditional and contemporary material, including songs by Ewan MacColl, Sydney Carter, Harvey Andrews and Stan Kelly. On Contemporary Campbells, originally released in 1965, the group's sound still featured the fiddle and mandolin playing of Dave Swarbrick. With New Impressions, released in 1966, Ian Campbell decided to bring in flute-player George Watts to replace Swarbrick, helping to create a new direction for the group, then at the peak of their success on the European folk scene. This is the first time these two LPs have been re-issued on CD.