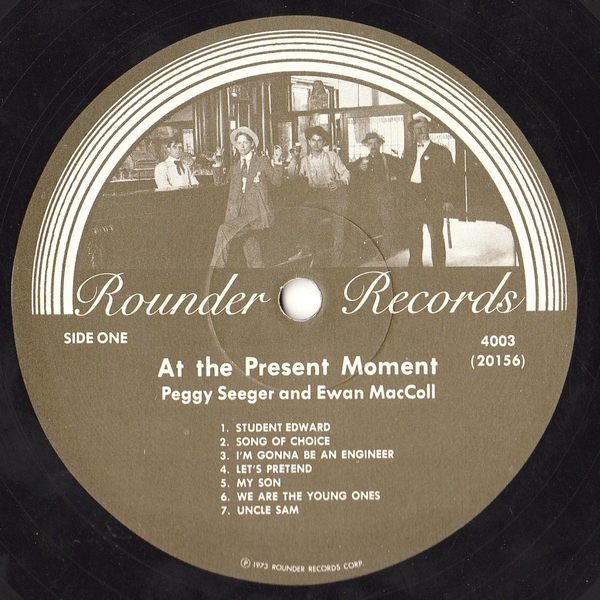 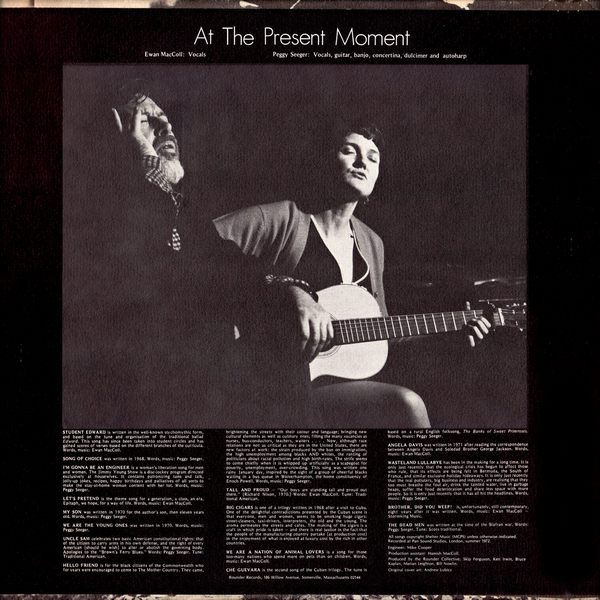 STUDENT EDWARD is written in the well-known and based on the tune and organisation of the traditional ballad Edward, This song has since been taken into student circles and has gained scores of verses based on the different branches of the curricula. Words, music: Ewan MacColl.

SONG OF CHOICE was written in 1968. Words, music: Peggy Seeger.

I'M GONNA BE AN ENGINEER is a woman's liberation song for men and women. The Jimmy Young Show is a disc-jockey program directed exclusively at housewives. It contains patronizing tone and talk, jolly-up jokes, recipes, happy birthdays and palliatives of all sorts to make the stay-at-home woman content with her lot. Words, music: Peggy Seeger.

LET'S PRETEND is the theme song for a generation, a class, an era. Epitaph, we hope, for a way of life. Words, music: Ewan MacColl.

MY SON was written in 1970 for the author's son, then eleven years Old, Words, music: Peggy Seeger.

WE ARE THE YOUNG ONES was written in 1970. Words, music: Peggy Seeger.

UNCLE SAM celebrates two basic American constitutional rights: that of the citizen to carry arms in his own defense, and the right of every American (should he wish) to alter or abolish the governing body. Apologies to the "Brown's Ferry Blues." Words: Peggy Seeger. Tune: Traditional American.

HELLO FRIEND is for the black citizens of the Commonwealth who for years were encouraged to come to The Mother Country. They came, brightening the streets with their colour and language; bringing new cultural elements as well as culinary ones; filling the many vacancies as nurses, bus-conductors, teachers, waiters .... Now, although race relations are not as critical as they are in the United States, there are new factors at work: the strain produced by the ban on immigration, the high unemployment among blacks AND whites, the ranting of politicians about racial pollution and high birth-rates. The strife seems to come chiefly when it is whipped up artificially as a scapegoat for poverty, unemployment, over-crowding. This song was written one rainy January day, inspired by the sight of a group of cheerful blacks waiting in a bus queue in Wolverhampton, the home constituency of Enoch Powell. Words, music: Peggy Seeger.

TALL AND PROUD — "Our boys are standing tall and proud out there." (Richard Nixon, 1970.) Words: Ewan MacColl. Tune: Traditional American.

BIG CIGARS is one of a trilogy written in 1968 after a visit to Cuba. One of the delightful contradictions presented by the Cuban scene is that everyone, men and women, seems to be smoking huge cigars: street-cleaners, taxi-drivers, interpreters, the old and the young. The aroma permeates the streets and cafes. The making of the cigars is a craft in which pride is taken — and there is real justice in the fact that the people of the manufacturing country partake (at production cost) in the enjoyment of what is enjoyed at luxury cost by the rich in other countries.

WE ARE A NATION OF ANIMAL LOVERS is a song for those too-many nations who spend more on pets than on children. Words, music: Ewan MacColl.

CHE GUEVARA is the second song of the Cuban trilogy. The tune is based on a rural English folksong, The Banks of Sweet Primroses. Words, music: Peggy Seeger.

BROTHER, DID YOU WEEP? is, unfortunately, still contemporary, eight years after it was written. Words, music: Ewan MacColl — Stormking Music.

THE DEAD MEN was written at the time of the Biafran war. Words: Peggy Seeger. Tune: Scots traditional.