The World of Ewan MacColl and Peggy Seeger 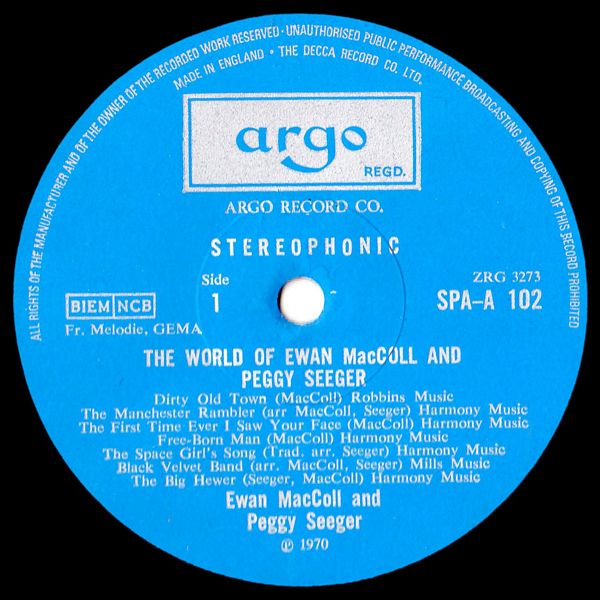 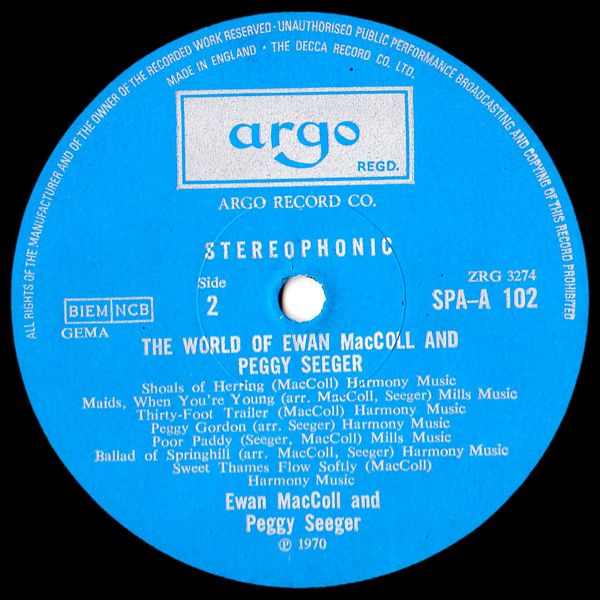 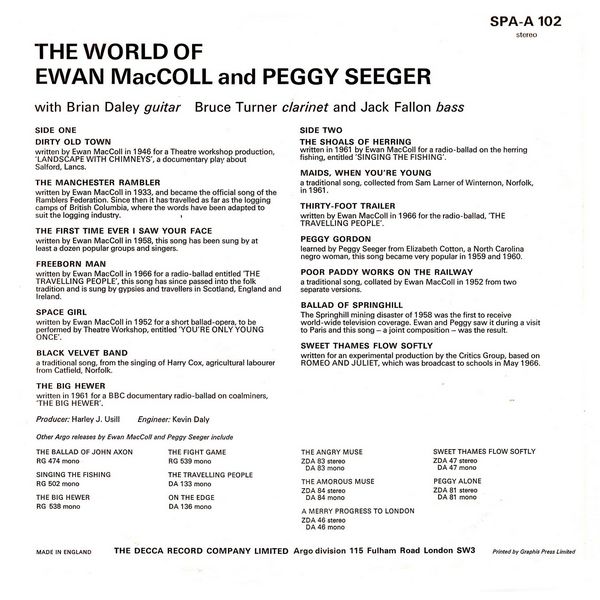 DIRTY OLD TOWN written by Ewan MacColl in 1946 for a Theatre workshop production, 'LANDSCAPE WITH CHIMNEYS', a documentary play about Salford, Lancs.

THE MANCHESTER RAMBLER written by Ewan MacColl in 1933, and became the official song of the Ramblers Federation. Since then it has travelled as far as the logging camps of British Columbia, where the words have been adapted to suit the logging industry.

THE FIRST TIME EVER I SAW YOUR FACE written by Ewan MacColl in 1958, this song has been sung by at least a dozen popular groups and singers.

FREEBORN MAN written by Ewan MacColl in 1966 for a radio-ballad entitled 'THE TRAVELLING PEOPLE', this song has since passed into the folk tradition and is sung by gypsies and travellers in Scotland, England and Ireland.

SPACE GIRL written by Ewan MacColl in 1952 for a short ballad-opera, to be performed by Theatre Workshop, entitled 'YOU'RE ONLY YOUNG ONCE'.

THE BIG HEWER written in 1 961 for a BBC documentary radio-ballad on coalminers, THE BIG HEWER'.

THE SHOALS OF HERRING written in 1961 by Ewan MacColl for a radio-ballad on the herring fishing, entitled 'SINGING THE FISHING'.

MAIDS, WHEN YOU'RE YOUNG a traditional song, collected from Sam Lamer of Winternon, Norfolk, in 1961.

THIRTY-FOOT TRAILER written by Ewan MacColl in 1966 for the radio-ballad, 'THE TRAVELLING PEOPLE'.

POOR PADDY WORKS ON THE RAILWAY a traditional song, collated by Ewan MacColl in 1952 from two separate versions.

BALLAD OF SPRINGHILL The Springhill mining disaster of 1958 was the first to receive world-wide television coverage. Ewan and Peggy saw it during a visit to Paris and this song — a joint composition — was the result.

SWEET THAMES FLOW SOFTLY written for an experimental production by the Critics Group, based on ROMEO AND JULIET, which was broadcast to schools in May 1966. 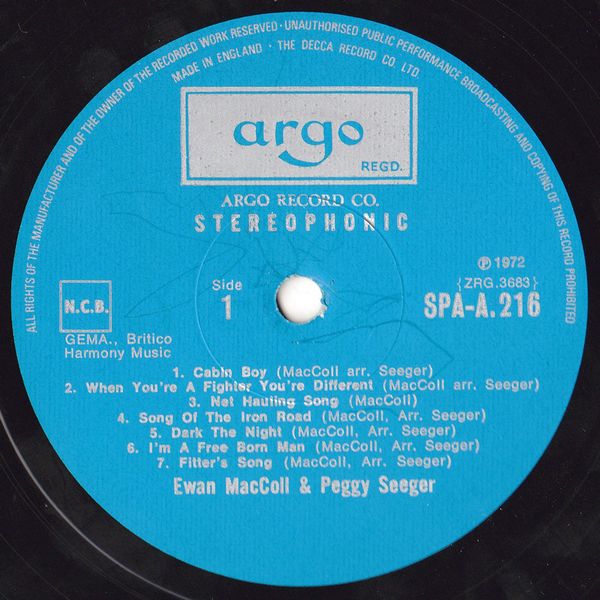 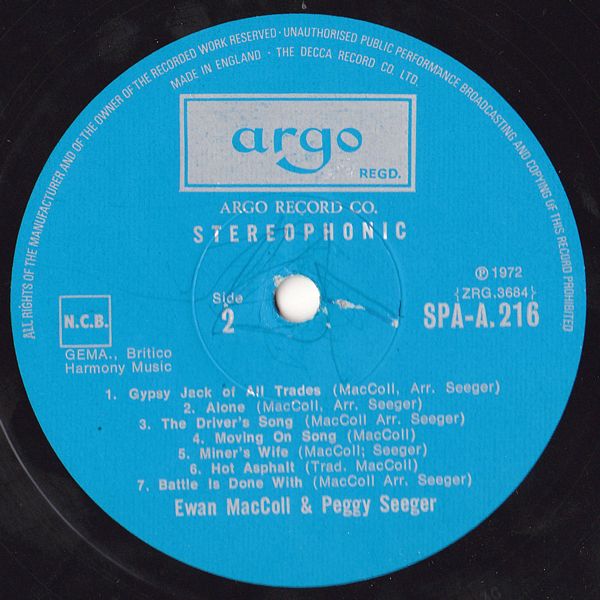 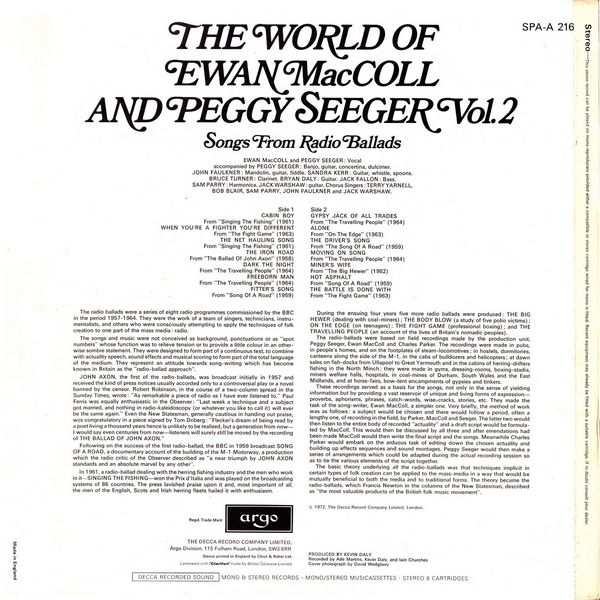 The radio ballads were a series of eight radio programmes commissioned by the BBC in the period 1957-1964. They were the work of a team of singers, technicians, instrumentalists, and others who were consciously attempting to apply the techniques of folk creation to one part of the mass media: radio.

The songs and music were not conceived as background, punctuations or as "spot numbers" whose function was to relieve tension or to provide a little colour in an otherwise sombre statement. They were designed to form part of a continuous text, to combine with actuality speech, sound effects and musical scoring to form part of the total language of the medium. They represent an attitude towards song-writing which has become known in Britain as the "radio-ballad approach".

JOHN AXON, the first of the radio-ballads, was broadcast initially in 1957 and received the kind of press notices usually accorded only to a controversial play or a novel banned by the censor. Robert Robinson, in the course of a two-column spread in the Sunday Times, wrote: "As remarkable a piece of radio as I have ever listened to." Paul Ferris was equally enthusiastic in the Observer: "Last week a technique and a subject got married, and nothing in radio-kaleidoscopy (or whatever you like to call it) will ever be the same again." Even the New Statesman, generally cautious in handing out praise, was congratulatory in a piece signed by Tom Driberg: "Flecker's dream of being read by a poet living a thousand years hence is unlikely to be realised, but a generation from now — I would say even centuries from now — listeners will surely still be moved by the recording of THE BALLAD OF JOHN AXON."

Following on the success of the first radio-ballad, the BBC in 1959 broadcast SONG OF A ROAD, a documentary account of the building of the M-1 Motorway, a production which the radio critic of the Observer described as "a near triumph by JOHN AXON standards and an absolute marvel by any other".

In 1961, a radio-ballad dealing with the herring fishing industry and the men who work in it — SINGING THE FISHING — won the Prix d'ltalia and was played on the broadcasting systems of 86 countries. The press lavished praise upon it and, most important of all, the men of the English, Scots and Irish herring fleets hailed it with enthusiasm.

During the ensuing four years five more radio ballads were produced: THE BIG HEWER (dealing with coal-miners) THE BODY BLOW (a study of five polio victims) ON THE EDGE (on teenagers) THE FIGHT GAME (professional boxing) and THE TRAVELLING PEOPLE (an account of the lives of Britain's nomadic peoples).

The radio-ballads were based on field recordings made by the production unit, Peggy Seeger, Ewan MacColl and Charles Parker. The recordings were made in pubs, in people's homes, and on the footplates of steam-locomotives; in hostels, dormitories, canteens along the side of the M-1, in the cabs of bulldozers and helicopters; at dawn sales on fish-docks from Ullapool to Great Yarmouth and in the cabins of herring-drifters fishing in the North Minch; they were made in gyms, dressing-rooms, boxing-stadia, miners welfare halls, hospitals, in coal-mines of Durham, South Wales and the East Midlands, and at horse-fairs, bow-tent encampments of gypsies and tinkers.

These recordings served as a basis for the songs, not only in the sense of yielding information but by providing a vast reservoir of unique and living forms of expression — proverbs, aphorisms, phrases, catch-words, wise-cracks, stories, etc. They made the task of the song-writer, Ewan MacColl, a simpler one. Very briefly, the method of work was as follows: a subject would be chosen and there would follow a period, often a lengthy one, of recording in the field, by Parker, MacColl and Seeger. The latter two would then listen to the entire body of recorded "actuality" and a draft script would be formulated by MacColl. This would then be discussed by all three and after emendations had been made MacColl would then write the final script and the songs. Meanwhile Charles Parker would embark on the arduous task of editing down the chosen actuality and building up effects sequences and sound montages. Peggy Seeger would then make a series of arrangements which could be adapted during the actual recording session so as to tie the various elements of the script together.

The basic theory underlying all the radio-ballads was that techniques implicit in certain types of folk creation can be applied to the mass-media in a way that would be mutually beneficial to both the media and to traditional forms. The theory became the radio-ballads, which Francis Newton in the columns of the New Statesman, described as "the most valuable products of the British folk music movement".