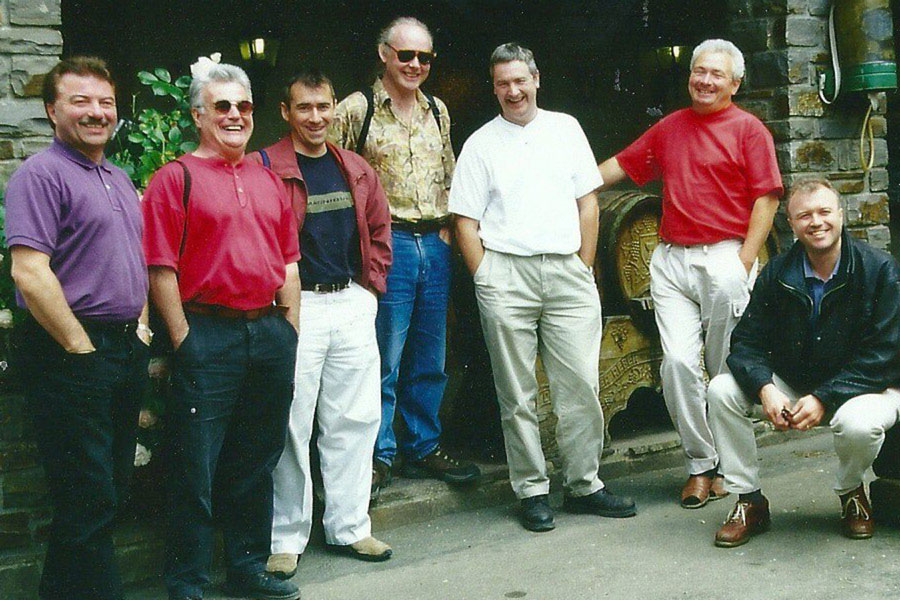 FFLAT HUW PUW, PIBDDAWNS GWYR WRECSAM (Huw Puw's Flat Wrexham Hornpipe)
A well-known ship song from J. Clynne Davies' collection, "Cerddi Porthdinllaen." Porthdinllaen was a busy port in North Wales and was once nearly adopted as the port for the main route to Dublin. The song tells of the growing ambition of a young lad to become a captain on Huw Puw's flat.

HIRAETH
This word has no exact English equivalent. The nearest translation is a yearning or longing.

WYRES MEGAN, MERCH MEGAN (Megan's Granddaughter, Megan's Daughter)
Two traditional tunes played simultaneously. The former was taught to Dafydd by his harp teacher, the late Nansi Richards, who arranged the tune specially for the Welsh triple harp. The latter is a popular tune in Waltz time.

LISA LAN (Fair Lisa)
A traditional Welsh love song. Many versions of the tune are also found in England and Ireland.

ROWND YR HORN (Round the Horn)
The tune was written in America by a Welsh exile, R. J. Tomas, and was called "Annie Deg o'r Glyn" (Fair Annie from the valley). The words were added later by a man known as Dick Common Sense who heard the tune on a ship in Anglesey.

CAER RHUN, NYTH YGOG, NYTH Y GWCW (Rhun's Fort, The Cuckoo's Nest, The Cuckoo's Nest)
The first air was given to Gwyndaf by his harp teacher Nansi Richards shortly before her death in 1979. The air was written for Nansi by one of the Francis brothers of Penygroes many years ago. Both versions of 'The Cuckoo's Nest' are from the Nicholas Bennett collection but are probably of Irish origin.

LLYDAW (Brittany)
An air from Brittany which is found today in Wales as a hymn tune. It originally came over from Brittany two centuries ago and the second part was lost. However this arrangement, by Nansi Richards, is probably the nearest to the original.

LLONGAU CAERNARFON (The ships of Caernarfon)
Collector J. Glynne Davies added the words to a traditional tune. As in "Fflat Huw Puw,"a young lad dreams of going to sea — this time on the ships which exported slates from the quarries of North Wales.

Y FERCH O BLWY' PENDERYN, TROS Y GARREG (The Maid from the Parish of Penderyn, Over the Stone)
The former is the melody from a well known Welsh love song written around the time of the 'Seven Years' war. The latter was originally published as a jig in Edward Jones's collection 'The Music and Poetical Relics of the Welsh Bards" It has since been slowed down and various lyrics added.

BUGEILIO'R GWENITH GWYN (Shepherding the white wheat)
A very sad love song by Iolo Morgannwg, based on the works of Wil Hopkin. Wil Hopkin, the young lad in the tale, likens his sweetheart Gwen to the white wheat which he shepherds, only for another to reap the harvest.

SANTIANA
The words were written by J. Glynne Davies to a well known shanty tune. The route around Cape Horn is again mentioned.