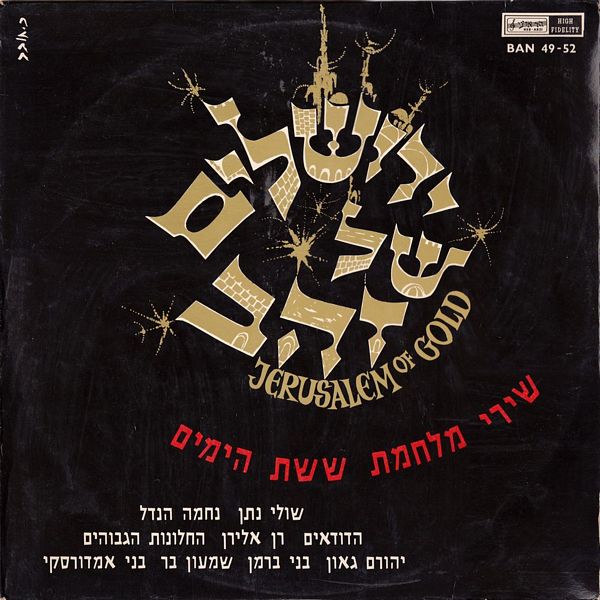 "When the guns roar — the muses are still", this indeed an old saying, but not necessarily a true one. The guns roared from the 5th till the 11th of June 1967, and the muses joined in singing with all their might.

Only a few days before the first shot was heard, a young and until then unknown singer called SHULY NATHAN, presented a new song by Naomi Shemer "JERUSALEM OF GOLD". Seems like destiny itself took a hand in the timing, because the melody and the lyrics of this song were on the lips of every soldier fighting for the liberation of Jerusalem, and no other song fits more the description of "Anthem of the Six Days War".

On his way to the Tiran Straits, to appear before Israeli soldiers who have opened them again only a few hours before, RON ELIRAN sang for the first time a song dedicated to the place "Sharm-A-Sheikh". Soldiers everywhere joined in on : "We shall pass through the Tiran Straits". An old song "Who cares" was brought back to actuality by lyricist Yossi Gimzo, and SHIMON BAR brought it to the front line. Another folktune was used by Haim Heffer for his song : "NASSER WAITS FOR RABIN" which helped keep spirit high during the battles. And yet another song by Naomi Shemer "Tomorrow" suddenly undertook a new meaning as performed by NAMA HENDEL.

This record comes to honour all those artists who did not hesitate for a moment, offered their talents to the service of the Israeli army, and while fighting was still going on a few miles away, brought a few laughs and a few songs to soldiers, resting from the last fight and getting ready for the next. These are the songs that accompanied the Six Days War, performed by the artists who sung them on every front from Sharm-a-Sheikh to Qouneitra, from Quantara to the Jordan.