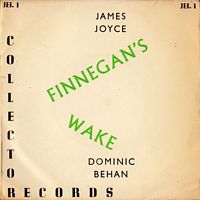 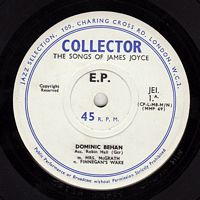 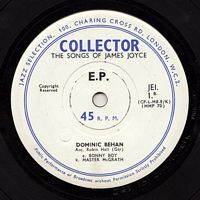 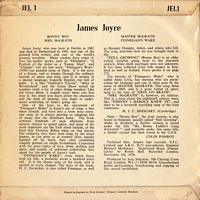 James Joyce, who was born in Dublin in 1882 and died in Switzerland in 1941, was one of the greatest Irish writers, and one of the world's greatest novelists. Many readers have come to love his earlier works, such as "Dubliners", "A Portrait of the Artist as a Young Man", and "Ulysses" but his last work, "Finnegan's Wake" (1939) has puzzled some of them. It is the story of a dream, and so breaks through the ordinary bounds of space and time, and it is written in a special language, basically English, but full of puns. It is like "Gulliver's Travels", "Alice in Wonderland", and the Goon Show mixed up together (with a lot of other things besides). Like the Goon Show, it sounds crazy when you first hear it, but when you learn about the characters and the style of humour, you begin to understand something of what's going on.

One of the keys to the enjoyment of "Finnegan's Wake" is Joyce's use of song: a fine tenor himself, and born into a town were everyone sang, he is always quoting or adapting bits of songs that the Dubliners knew. The book contains hundreds of such allusions, from nursery rhymes to grand opera, and some of the most important are the Irish street ballads, of the kind that Dominic Behan sings on this record. For centuries they have been sung by the street singers, in city pubs or at country fairs; usually learned off by heart, they were sometimes roughly printed on single broadsheets. Concerned with the great topics of love, drink, politics, and sport, and usually of unknown authorship, they speak for the people of Joyce's land.

" FINNEGAN'S WAKE", from which Joyce took his title, is probably about a hundred years old. It is the theme song of the book, and is quoted in every chapter. The 'hero of the book, H. C. Earwicker, is also called Finnegan, as well as Humpty Dumpty, Adam, and others who fell. The song describes how he was brought back to life.

" STILL GROWING" (Bonny Boy) is an older ballad, possibly going back to the sixteenth century, when child marriages were not unknown. It has been collected from folk singers in England as well as Ireland. Joyce quotes it on page 232.

The heroine of "Finnegan's Wake", who is called Anna Livia, has enemies who are persecuting her husband, and one of them goes by the name of MASTER McGRATH. This song dates itself as 1869, and is a great ballad of sport, sung to the tune of "ERIN GO BRATH".

" MRS. McGRATH" is, however, no relation. This is a song about the eighteenth century wars, like "JOHNNY I HARDLY KNEW YE", and used to be a favourite marching song of the Irish volunteers.

Note: "Bonny Boy", the Irish version, is also found in England, usually called "Still Growing", whilst in Scotland, a further version is found under the title "Ma Bonny Laddie's Lang A-Growin'", and normally under this same title, a further variant has been found in the U.S.A.