Alan Lomax and The Ramblers Ewan MacColl and I were both raised with folk songs like Gypsy Davy and Careless Love right in the house with us. Ewan's father, a Scots iron puddler. used to spend the whole of Hogmanay with his pals singing Scots ballads and drinking songs. Since then, MacColl has wandered over the British Isles as a poet and an actor, picking up songs along the road. When there was no traditional song to fit a scene in one of his many plays or radio programmes, he composed one, like a true Scots bard, drawing upon a heritage of tunes and verse forms he acquired before he could read or write. Dirty Old Town, which catches the nostalgic mood of love bigtown, and Hard Case, which is couched in absolutely accurate convict lingo, are examples of this kind.

As for me, my father, John Lomax, who was America's first ballad hunter, the collector of The Boll Weevil, The Dogie, Home on the Range, and thousands more, brought me up to take over where he left off. Out of our recording trips all over the South grew the Archive of Folk Songs in Washington, and came the songs like Rock Island Line (recorded in Arkansas in 1936), Take this Hammer (recorded in Virginia in 1934), Stewball (recorded in Mississippi in 1933), and hundreds more that are now beginning to be popular in Great Britain.

On this record the Ramblers belt into their Scots, Irish and English songs with the same lack of inhibitions that characterize a Memphis jug-band or a Kentucky mountain square dance orchestra playing boogie-woogie. Sandy Brown, a ballad-loving Scotsman, sings through his clarinet. Johnny Cole, an aircraft parts worker with a real genius for the harmonica, sings his part on his small reeds. The rhythm section is composed at times of washboard and bongo drums, but it always rests upon the firm beat of Jim Bray on bass and Bryan Daley on guitar. Shirley Collins. from Hastings, sings the high parts and the soft love songs. Peggy Seeger has an uncanny instinct for accompanying everybody. Occasionally I am permitted to sing some American songs the way I heard them in the South and West when I was very young — and out of this came the new songs Oh! Lula and Railroad man. But we are all united in our hope that some day, and that not faraway, the British people will again be singing their own folk-songs which are the most beautiful and varied of Western Europe. and that the Ramblers will have helped. For three-quarters of a century, transportation to Australia was one of the great themes of folk song in the British Isles, particularly with the street ballad singers. Some of the Convicts were tough and desperate criminals. Others were transported for minor crimes, such as poaching. into which they had sometimes been forced by sheer hunger. Ewan MacColl, who is one of the finest folk singers in Britain, here sings one of the best-known poaching ballads, VAN DIEMAN'S LAND. As a contrast to this song about the countryside, he sings a transportation ballad set in the city, in Belfast. In THE BLACK VELVET BAND a pretty girl steals a watch, but the young man with her gets the blame, and so, like the poacher, he ends in Van Dieman's Land. As well as these ballads from the British Isles, Ewan MacColl sings JIM JONES AT BOTANY BAY, a song that was made by convicts in Australia. It is one of the very few convict songs that has survival.

In the days when Australia had more migrants — unwilling or otherwise — than she had native-born, sons and daughters, the latter were called currency lads and lasses. The three convict songs are by no means doleful, despite their subject: but we thought the currency-born should be represented, so we have added two of the liveliest bush songs. These come from a much later date. EUABALONG BALL, probably comes from the 1890s: it tells about a rather rowdy bush dance. We had to ask the singer to censor it a bit. LIME JUICE TUB is it shearers' work song, that pokes fun at Pommy new chums, trying their hand at shearing and making a mess of it. These two songs are sung by A. L. Lloyd. who learnt them when he was a Pommy new chum working on sheep stations in western Ncw South Wales.

We Are The Engineers: Ewan MacColl and Peggy Seeger 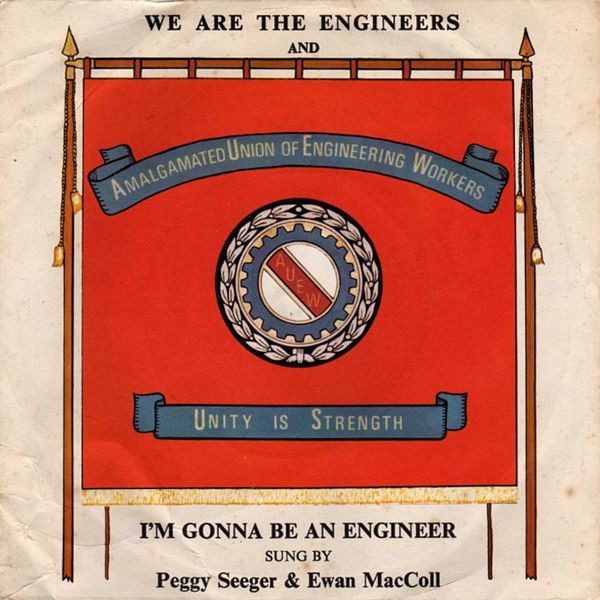